Before seeing Tim Winton at the Auckland Writers Festival, if I’d seen him walking down the street I’d have pegged him as an aging surfer dude. And maybe tried to sell him drugs. Not really. But apparently that often happens to him.

I read Dirt Music while attempting to drive from Perth to Broome a few years ago. We never made it (it’s a 2241 kilometer journey, what were we thinking?). But I did scout a bunch of gorgeous Perth girls to come to Auckland and work for my agency, Nova. And we did some awesome off-roading in our gold Toyota Camry (don’t tell the rental agency; serves them right for reneging on the four wheel drive). And I did get knocked off a quad bike by a kangaroo (impossible, said the guide). And I did, in every tiny, sunburned Western Australian town and in every acre of ocean, see Georgie and Luther slipping into some discreet place for a little more of each other. Dirt Music was the word-sound-track to this trip.

“I don’t think a novelist should have to feel they have to change things. There’s a place for useless beauty” – Tim Winton

Winton is a beautiful dichotomy of strong male physical presence and shyness. When the audience laughs at something he says, he looks down and rubs an imaginary spot on the leather chair’s arm. He is incredibly humble. “I have no courage,” he says. No one believes him. He is passionate about the environment and his family. “The natural world is enchanted,” he says. His trajectory to fame runs alongside Western Australia’s iron ore mining boom, through the 90s and early 2000s:

“We were the wrong state, on the wrong side, in the wrong country, in the wrong hemisphere. Then suddenly we got rich. From being ignored to being smug. Instantaneous. Smug billionaires. It was as if they’d planted the seeds of iron ore themselves, and waited for the rain” – Tim Winton 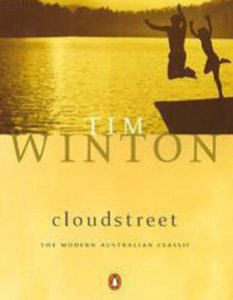 Winton tells of a harrowing Hadley Hemingway moment, when he left the only copy (and carbons) of his Cloudstreet manuscript on a bus in Greece:

“My three-year-old asleep on my shoulder, suitcase in the other hand. I was nearly sick. A man tapped me on the shoulder, pointing at the back of the bus. I could have tongue kissed him. I couldn’t have started again” – Tim Winton

Divinely, it was Cloudstreet that propelled Winton into the spotlight, put food on the table and a roof over his family’s head.

“I feel hope in nature, and in the faces of strangers” – Tim Winton

There is magic about Winton: the way he tucks his long hair behind his ears; the way nuggets of beauty roll off his tongue like shiny pieces of ore. He says, when he sits down to write, that he never knows if the magic will come. It will, Tim Winton, it will.

Tim Winton appeared at the Auckland Writers Festival, Sunday 17 May 2015.